Win Tickets To Sin City: A Dame To Kill For (yeah) 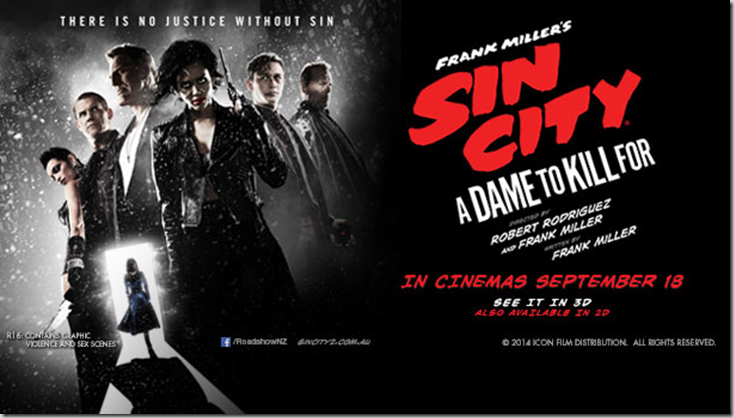 Sin City: A Dame To Kill For is coming to cinemas September 18, and the good folks at Roadshow Films & NZ Entertainment Podcast are giving you the chance WIN one of 10 double passes.

Co-directors Robert Rodriguez and Frank Miller reunite to bring Miller’s visually stunning Sin City graphic novels back to the screen in Sin City: A Dame To Kill For. Eva Green stars as Ava, a temptress who enlists Dwight McCarthy (Brolin) in a bid to escape her ex-husband. Joseph Gordon Levitt plays Johnny, a mysterious gambler set on taking down his sworn enemy in a high stakes game of life and death. Weaving together two of Miller’s classic stories with new tales, the town’s most hard boiled citizens cross paths with some of its more notorious inhabitants. Newcomers Juno Temple and Jeremy Piven join the all-star cast including Mickey Rourke, Bruce Willis, Rosario Dawson, Jessica Alba, and Jaime King who will be making their return to Sin City: A Dame To Kill For.

Email your name, address & phone number to competitions@globalvoicemedia.com by Saturday the 13th of September 2014, Winners drawn Sunday 14th September – you can enter as many times as you like!