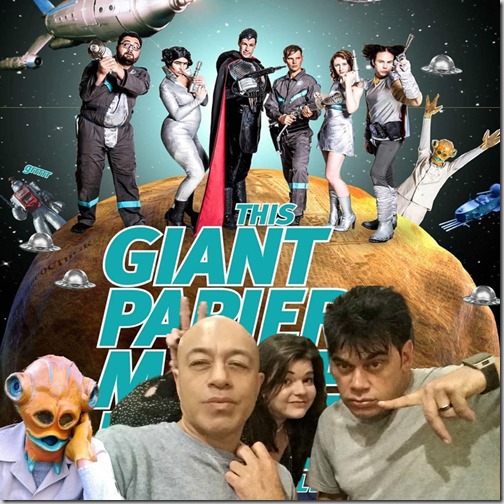 A full length Kiwi Sci-Fi Movie that isn’t directed by Peter Jackson or Taika Waititi? Unbelievable. However, this is the predicament director/co-writer (with Andrew Beszant) and lead actor in the film Christian Nicolson finds himself in, it’s almost a sub plot to his first full length feature film.

The new romantic ‘kiwi-as’ space comedy, heavily influenced by childhood flicks Star Wars & Star Trek has racked up a few awards on the way, including the prestigious Boston & London Science Fiction Film Festivals, an impressive start for a film launch, even in this galaxy.

Clocking in at 112 minutes (He didn’t want to be restricted by budget or time constraint) the film glosses over the lives of three mates, Tom, Jeffrey & Gavin who attend a science fiction event and haphazardly fall inside a black & white B grade sci-fi movie.

From here our three heroes are pitted against giant Tuatara, prehistoric cave people, Amazonian warriors (the female kind) and the evil antagonist Lord Froth (Joseph Wycoff), all while trying to get back home to Auckland – you’d be forgiven thinking it almost reads like a new Tui beer ad (yeah right).

The film succeeds where others fail by not taking itself seriously. Nicolson isn’t afraid to take the piss out of ordinary everyday situations, while the story itself robust enough to take a hammering from its superb cast of relative unknowns, a risk that has handsomely paid off.

Nicolson as Tom, the ring leader of the intrepid trio is the agnostic but debonair protagonist, he ends up falling for space princess Lady Emmanor wonderfully played by (Sez Niederer), her performance as the ‘North Shore’ girl who takes on alter ego Lady Emmanor is amiable, the onscreen chemistry as believable as any romcom out at the moment (yes, you know the film).

There’s also some nice touches that may bamboozle overseas audiences, the Glasson’s receipt found in Emmanor’s handbag or the Haka stance with crossed arms whenever they teleport, all delivered in true Kiwi vernacular which isn’t as cringe worthy as you may think.

Daniel Pujol is great in support as comic nerd Jeffrey who believes he is sci-fi hero Kasimir while Lewis Roscoe is cast perfect as the side-swiping snide Gavin. Jarred Tito adds the fun element, his fish-head alter ego Gotlieb is as far removed from his effeminate character Bruce in the film.

Boulder is great fun, below par special effects, lots of tin foil, makeshift laser guns, the Evil baddie Lord Froth & side kick Fralligay (They were cool) all give the film its unique flavour delivering what Nicolson says “The biggest, most epic low-budget film ever made in New Zealand”.

A hilarious galactic romp through the galaxy that has no Orcs or Hobbits yet still manages to retain its comedic Kiwi flavour.