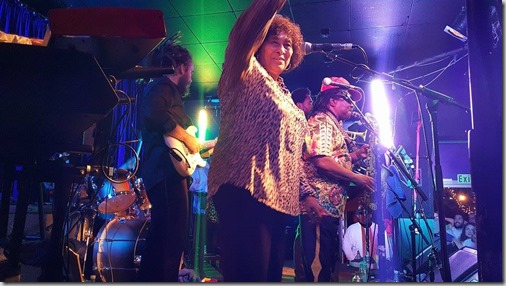 The Skatalites are the type of band that not only demand respect but also an audience worthy of playing to, Auckland’s Kings Arms was the perfect place to launch their NZ Tour of their 50th Anniversary (damn, 50 years in the business)

Not only was it full house at the Kings Arms (something I haven’t seen in a while) it was hot, and not only in the musical sense it seems global warming had taken over the front rows, with wanton rude boys & skankers at the front of the ensuing melee

Lead singer Lester “Ska” Sterling is of course the real deal, the sun glasses clad alto saxophone king is the ring leader harnessing the audiences kinetic dance grooves to orchestrate the band of musician comrades. ‘El Pussycat’ and their instrumentals such as ‘Tear Up’, (the original ska anthem), the infamous Guns of Navarone, (which also made the UK top 40) and Dave Brubeck’s ‘Take 5‘ were anxiously lapped up by the mature crowd who were well into festivities, it was a vocal and excited audience that were enjoying the once in a lifetime experience before the James Bond theme song sent the crowd back into a frenzy

Reggae & Ska are not without their designers, among those Bob Marley who was more than once mentioned by Sterling, a few Wailers tunes later it was time to bring out the first lady of Ska – original vocalist, Ms Doreen Shaffer who appeared with a rousing cheer from the crowd. “Hello Auckland” she said before launching into the instantly recognisable Barbie Gaye hit song ‘My Boy Lollipop’ followed by The Archies classic cover ‘Sugar Sugar’ and The Wailer’s classics ‘Simmer Down‘ & ‘Nice Time‘ She was poised, her voice still as young as she was charming, she even had time to shake the hands of the audience, she was definitely a favourite with the crowd and left by raucous cheer

It’s rare that a band can boast of this milestone achievement but THE SKATALITES are more than a band; they are an institution, made up of a collective of some of Jamaica’s finest musicians who not only defined the sound of ska in the 50’s and 60’s but influenced and inspired a number of generations and bands both on their own turf and around the world.

By the end of the show various members came on stage or left to attend to their thirst, by now Lester had the mic and was making sure everyone knew who the “Boss” was, there seemed to be a bit of ‘in band’ “argy bargy” as he made references to “starting the song” however this was short lived and before anyone noticed they were back into the groove. For me I loved the heavily ska-infused Beatles song ‘I Should Have Known Better’ (so good, just make up your own lyrics) and crowd sing-a-long favourites ‘Rock Fort Rock’ & ‘Phoenix City’.

Tonight was a revelation, the Skatalites proved lyrics do not maketh a song, all you need is a great horn section, a solid band leader and a sweet singing chanteuse and the rest will take care of itself. Despite a changing line-up during their 50 years in the business, The Skatalites’ jaunt to New Zealand sees the nine-strong group and original founding member, vocalist Doreen Shaffer, aka the Queen of Jamaica Ska, I mean to see these legends of Reggae perform is truly a ‘Damascus road’ experience that you will happily take to your grave – guaranteed. Did I mention she shook my hand?