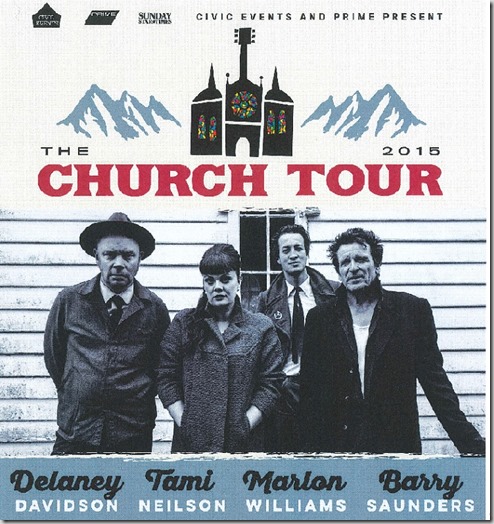 If you weren’t at Maroon 5, chances are you were here hanging with the cool kids. Well those already old enough to have adult ones if you get the drift

I don’t if that was true or not, however the majestic Holy Trinity cathedral did seem a little out of place for country music artists more known for their songs about ‘beer drinking & womanising’

As the quartet took to the stage for Travelling Creature (penned by Davidson & Williams) to warm up the lungs, it was clear it was probably the best Country music line-up seen on stage for a long time

Barry Saunders from The Warratahs (or ‘Tahs’) remained onstage, his boyish James Garner Maverick look and velvet dulcet tones stirring, as the audience reminisced the songs that had made the band well known in the 80s & 90s including hits Hands Of My Heart & Maureen musing ‘I recorded this song with my boy band 28 years ago’

Tami Nielson needs no introduction, however she did explain her ‘funny accent’ was by way of Canada. Her style, her big voice and song writing has earned her numerous accolades. Sh*t, what a voice, she could make American president Obama sit up and take notice. My idea is once the new flag’s been sorted just get her to sing the national anthem at International sports fixtures

Her hit song Walk was stellar live as was Woohoo a lively duet with stringed instrument maestro Dave Khan. Her light banter enchanting the crowd as she dedicated songs to her father who recently passed away on the touching Lonely and First Man

Marlon Williams and Delaney Davidson have a history recording albums together they have forged a path that has reignited the local Country music scene. I mean even the Aussies have unabashedly claimed Williams as one of their own

Williams possesses a voice that like Haley’s comet comes around once in a lifetime, his solo treatment of the classic MacColl folk song The First Time Ever I Saw Your Face is testament of this. Rambling through a mix of old and new songs off his new album, Williams ratified his Maori roots pulling out Christmas favourite O Holy Night with Tami Nielson sung in Maori and English, a timely reminder also that the festive season is just around the corner

This Church Tour 2015 has outdone itself with one of its strongest artist line-ups in its already impressive seven year history. I loved Delaney Davidson’s short but poignant set, especially his dark loop-pedal version of the traditional In the Pines, his earnest grasp of the blues is something that shouldn’t be underestimated

It’s only a matter of time before the Aussies claim all our top musicians, make sure you see them before they do