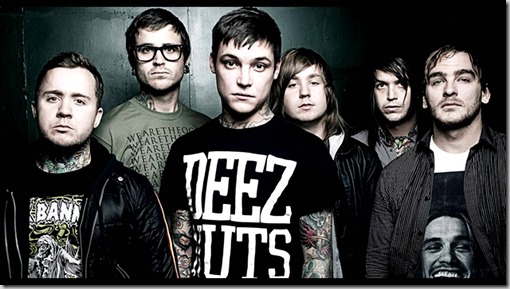 The Amity Affliction’s Joel Birch sounds relatively composed as he drives while talking to me somewhere in the great wide Oz – Australia to you and me. Birch, one of the singers (he’s the unclean vocals) from the popular Australian metal core band, is excited about the prospect of playing New Zealand for the first time on the Big Ass Tour playing Auckland tomorrow December 10th with A Day To Remember & Motionless In White, he optimistically admits he has a few things to do before embarking here across the ditch

“I just got a haircut and I’m driving to meet me wife for a swim” he admits. “The rock ‘n’ roll dream”

I confide that it’s my first time conducting an interview with the subject driving, a scenario that’s never really come up until now. As we chat talk soon deviates to The Big Ass Tour with international Metalcore Pop merchants A Day To Remember and also a chance for the heavily tattooed singer to meet up with his father in New Zealand

“Auckland is actually the first show, hard to say really” he muses. “Ticket sales leading up to it and the response leading up to it has been pretty wild, I know it’s going to be the wildest tour we’ve done to date. I’m pretty stoked, actually, stoked to get back to New Zealand because that’s where my family’s from. I’m the first from both sides of my family to be born in Australia; my dad is coming so I haven’t seen him in twenty-six years so that’s going to be pretty crazy”

The Amity Affliction have released four studio albums, last year they released their latest studio album Let The Ocean Take Me, spawning the top 40 singles Pittsburgh and Don’t Lean On me. Not exactly the ‘new kids on the block’ Birch knows the band have a way to go to get to where they want to be, it’s a journey that along the way has seen the band pick up a few learnings

“The last guy we parted ways with just didn’t fit in the band” he says. “We’ve kind of grown up in the band, it’s kind of tricky when you’re growing up and everyone’s changing into becoming different men than when you were boys – I guess we’ve finally found the right sort of team, the right chemistry with all the members. It’s just finding that right mixture of personalities I guess, it is a lot like being in a relationship with someone, but I think we’ve finally got the dream team now”

There’s no denying the digital age and social media is one way for a band to get traction on people buying their music or ‘buzzing’ the hype of an artist in this visual Instagram/Facebook world, it’s also inevitable that people are sharing digital files including music and film, however the crackdown worldwide on piracy doesn’t seem to have deterred the use of downloading or file sharing

“Go for it, we do it” he says. “I mean everyone does it. I think they’re bullshitting if they say they don’t. The thing I try to emphasise to people, is if you like it then buy it, that’s what I do. If you really like something and appreciate it then pay for it, because it’s not much money for the effort that’s gone into it, the months of work that goes into 40 minutes of listening. It’s not much to pay $15 on ITunes or something – I think if you like it, you should pay for it. If you haven’t, then you’ve had a good listen move on”

The band are crazy busy, they’ve played the full Vans Warped Tour last month, headlined in the U.S. with the “Seems Like Forever U.S. Tour” and even had time to release a documentary film for fans with a deluxe edition CD version of their hit CD Let the Ocean Take Me. However, Birch is realistic about the band’s progress thus far and is adamant the band aren’t ready to rest on their laurels just yet

“We want to start growing the band internationally” says Birch. “We’ve started to see some success overseas after all the touring we’ve done. I guess that’s our next goal becoming a world wide band and not just an Australian band. We’ve established ourselves here and now its on to the next phase, just to have longevity you know? We don’t want this to just be a ‘flash in the pan’ kind of thing there’s still a long way to go”