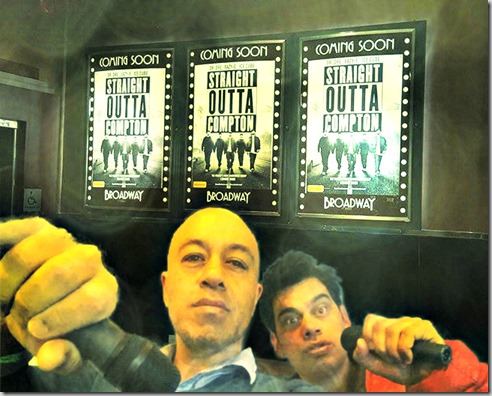 By now you would’ve seen the copious memes all over the web with its Straight Outta Compton template. Not even the countless conspiracy theories of rapper Ezy E’s death (Eric Wright) of an aids related illness could predict a biopic film about one of the most influential rap groups in the world would be number one at the American box office

SOC is better than your usual bio type movies by a stretch. It was the 90s, the time of Rodney King a black man who was beaten up by cops and later became a symbol for racial tension in the States. It was a time of civil unrest and police brutality which director F.Gary Gray captures wonderfully. It’s a stark reminder that sets the mood of the film, the darker side of Gangster Rap and ‘gang banging’ the norm that came with the hype as NWA stormed the country straight outta Compton

For the most part this film works. Jason Mitchell as Ezy E is impressive in the role, right down to his stature (he was 5”5) and brash mannerisms you could be right thinking that this was the rapper incarnate back for another go. The movie is produced by Ice Cube, Tomica Wright (Ezy’s widow) and ‘billion dollar’ hip-hop mogul Dr Dre so you can bet this film is going to be a hard hitting portrayal of the group, opening itself to scrutiny and possible libel (it’s America after all)

One of my favourite actors Paul Giamatti seemed at times overplaying the role of Jerry Heller the man responsible for signing NWA and ultimately starting Ruthless Records with Wright. Giamatti‘s gritty performance ensures you feel the tension in the relationship between Heller and the group as they slowly part separate ways – Dre to start Death Row Records with Suge Knight (Snoop Dog & Tupac) and Ice Cube going solo, leaving Ezy E and Heller to thresh out the label post fallout, apparently the others didn’t like Heller’s handling of the contracts

Ice Cube’s kid O’Shea Jackson Jnr is uncanny as his dad, playing the young Ice Cube he brings a real presence to the role, as does Corey Hawkins as the young Dre cementing themselves as the new Hollywood brat pack, the future looks bright for the film’s young lead stars

SOC surprised me, its bawdy commentary on 90s West Coast Hip Hop and NWA is a surprisingly good watch. Sure it’s a little ‘Hollywood’ in places but this is kept to a minimum, some of the acting maybe overcooked but there’s lots to like about this film. It’s a film that will shock most who are not familiar with the group’s beginnings, most famous for their anti-police anthem Fuck the Police or the beat riddled Straight Outta Compton

How much of the film is true and how much is Hollywood is really anyone’s guess, one things for sure though, there isn’t anybody who could’ve made this film as legit than Dre & Ice Cube. Director F.Gary Gray has pulled off one hell of a story and translated that successfully into box office dollars. It’s a given then the movie has put West Coast Hip Hop back on the map and reignited renewed interest in NWA’s music