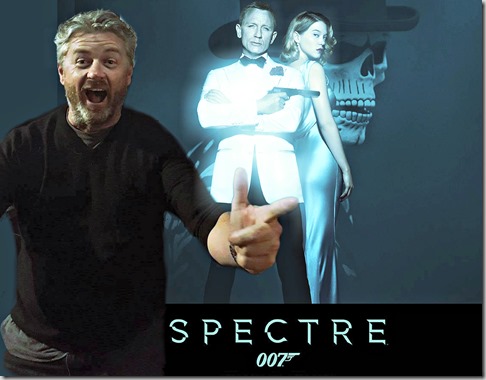 007 James Bond is back. Spectre is a bombastic spectacle, amazing action set pieces, and a rollercoaster ride of fun to behold. The three previous Daniel Craig James Bond instalments has grown the Bond mythology, looking into the make up of the man, adding to the dark side drama of Bond while fighting in a sophisticated political underworld of corruption

Spectre is full of nostalgia from Bond films of past, not wanting to add too many spoilers, lets just say it is a warm welcome. The fun shines back with hammy humour, one liners, and silly over the top situations. Spectre has Bond pushed further into a Superhero character, fitting as the cineplexes are now flooded with comic book super hero movies

Daniel Craig Bond embodies the Sean Connery Bond of coolness, and the Roger Moore Bond of fun. Sexy beautiful Bond girls are no exception, Monica Bellucci brings age, grace, beauty and shares a hot scene with Bond. Lea Seydoux a Bond girl that is an equal and possibly the one that could penetrate Bond’s heart. As with any Bond Film you need a great villain, Christopher Waltz does a great job, I only wish he was more ambiguous than being tangible as a human. Jaws villain of past film ‘Moonraker’ makes a teasing comeback in the skin of Dave Bautista. This time around, Q (Ben Whishaw) gets into the action, which is a pleasant surprise

Director Sam Mendes (American Beauty, Road to Perdition) has brought a intelligence with style in his direction to his two Bond film outings Skyfall and Spectre. Working with incredibly skilled directors of photography, adds a level of top class. The opening one shot in Spectre is a marvel. Out of all the Bond films of past, my mind reflects on On Her Majesty’s Secret Service with George Lazenby, a Bond film showing his vulnerability, directed with a def hand of style

I for one really enjoyed Spectre, maybe more than I should, but I am a fan of James Bond, and I soaked in the nostalgia that filled the screen