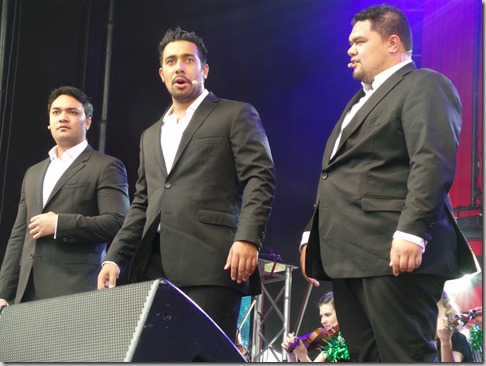 The boys at last years Christmas in the Vines

The thing with Sol3 Mio is that you’re guaranteed an entertaining night of mirth & merriment. Even if you are adverse to Opera music, like myself, the welcome omission of expletive-deletives replaced by the good natured Polynesian joking would make even Miley Cyrus blush – although I’m sure Anika Moa was chomping at the bit to ‘go all the way’

The still weather against the calm backdrop of the vineyard beckoned the crowd, the atmosphere took on its own setting in the industrial plot near Auckland’s airport. Brothers Pene and Amitai Pati and Cousin Moses Mackay were in fine form, cracking jokes, baiting the crowd to dance & bringing alive the spirit of Christmas through song, dance and Rock (the jingle bell kind)

It never ceases to amaze me how these burly Samoan boys have eluded rugby league scouts to end up on a path dressed in suits singing arias. As they took to the stage to shake what their mamas gave them, Winter Wonderland, Jingle Bell Rock & Little Drummer Boy were lapped up by the enthusiastic crowd as Pene quipped “We’ve got big Drummer boys not little ones and one ‘drama-boy’”

As the night descended across the vines, glow sticks made their way lighting up the picturesque venue, crowd favourites (Dean Martin inspired) That’s Amore, Beauty & the Beast (with Pene & Amina) while Tom Jone’s smash hit songs Delilah & Ten Guitars made a welcome appearance that had even the most fastidious punter singing along. “Is anyone here from Mangere?” Pene quizzed the sea of faces. “Not many in here, I think most of them are at the top of the hill listening”

Highlight of the night had to be Moses Mackay & dad Victor singing the Elvis hit I Can’t Help Falling in Love with You. His recollection of how his dad won a trolley full of groceries as a young boy from Tokoroa, was natural, loving as his dad entered side of stage to join him for a touching duet. The addition of Pene & Amaitai’s partners Amina Edris & Isabella Moore was a bonus, as they weaved their gifted voices with the orchestra to amaze the audience on Quando M’en Vo from La Boheme & Catalini’s Ebben

The boys announced they are taking time out next year from each other but not before announcing a nationwide tour starting March next year. Sol3 Mio are a vocal phenomenon, a freak force majeure. How they are New Zealand’s highest selling album still perplexes given their music genre in this stilted pop age, but make no qualms, they are one class act that deserves every bit of kudos that comes their way. Now about those Sol3 Mio aprons…