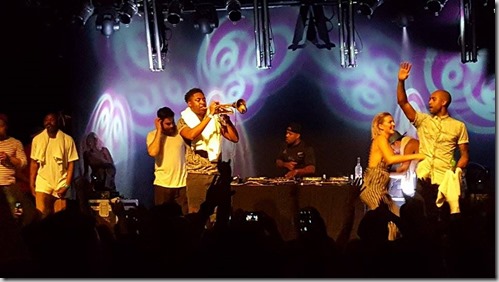 It was probably the most people I’d ever seen on stage at Auckland’s iconic PowerStation, EDM act Rudimental (a sizeable force majeure themselves) & Powerstation’s rent-a-crowd crammed onstage for a finale in a set that delivered a whopping couple of hours of mayhem on the dance floor, and this after playing Ed Sheeran’s memorable Mt Smart gig to thousands

DJ Locksmith cloaked in All Blacks jersey spun the tunes that literally had the staggering crowd bouncing all night, with live MCing, trumpet & vocals Rudimental’s fave songs came to life not to mention setting the venue into a dance frenzy. Playing well-known radio tunes the powerful Waiting All Night, Emili Sande’s Free & Not Giving In with John Newman, chances are if you threw a stick at dart board it would land on one of their songs, as the drum and bass act made the most of the small stage motioning the audience to get up, it was quite a spectacle to behold

Of course being Ed Sheeran night, you could not get away without playing at least one of their colab hits with the pop superstar, Lay It All On Me was nicely inserted as were other hits that were churned out, House Of Pain’s Jump of course had the desired effect on the crowd, pretty stink if you weren’t cause you would’ve stood out like a muppet. It also signalled the last gig of their world tour, so of course asking the crowd if they wanted ‘one more’ song, they were going to milk it, would’ve been rude not to really