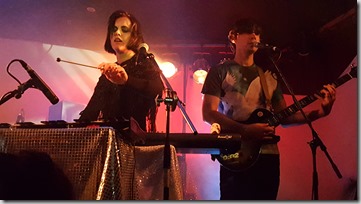 Last night was the perfect opportunity to see Princess Chelsea (a.k.a. Chelsea Nikkel) up close and intimate at the Kings Arms before she embarks on her tour junket of Europe & Turkey (isn’t that part of Europe?).

Ably supported by some great new raw musical talent (go Bespin), the one time member of indie-pop duo The Brunettes looked relaxed and at ease before assuming her twee pop alter-ego Princess Chelsea, it’s an almost a Jekyll & Hyde transformation as she prowled and paced the stage like a fresh-faced Siouxsie Sioux, it was both enthralling and uncanny.

What I like about Chelsea is the depth of honesty in her lyrics, her voice almost child-like and guileless it’s a definite acquired taste. Tracks like Yulia and her viral hit Monkey Eats Bananas, and Ice Reign from her first album Lil Golden Book were gratefully accepted by the small but vocal crowd.

She played a good mix of old and new, her brand new album The Great Cybernetic Depression released via Flying Nun/Lil’ Chief only a couple of days ago providing most of the material for tonight’s show (love that addictive No Church On Sunday). Chelsea admitted she had been busy travelling which is why it’s taken so long to release her new album

Still there was time to resurrect a couple of older tunes including the seminal hit The Cigarette Duet with The Brunettes’ Jonathan Bree who also plays bass in the band, the trade-off vocals of both adding a 3D effect with Bree’s distinctive dulcet tones, while the baroque-tinged Frack was played to a tee as if she was lip syncing a la Brittany. Even TV show Nashville wasn’t out of bounds as she cordially joked about TV screen character Luke Wheeler before educating the audience on minor chords during a noticeable laptop malfunction.

Princess Chelsea has the indie chops and tunes that demand an audience. Her image marketing gold in this diluted studio age where image is sometimes make or break. Although not everyone’s cup of tea, her musical merits alone should see her do well, let’s just hope for the Turks sake they get a grasp of her music if not for the sheer hell of it