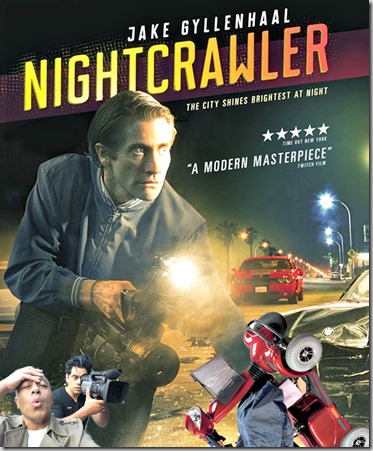 Finally, a movie that appeals to all of the senses in the one serving and possibly the sixth, for any neurotics that may be drawn into this film by forces unknown to us mere mortals. Nightcrawler, Dan Gilroy’s latest movie, could definitely be categorised as a ‘Psychological Thriller’ but it’s so much more.

Bringing You The News

From start to finish we are taken on a controversial, gob-smacking trail by a pathological, desperado Lou Bloom (Jake Gyllenhaal of Jarhead fame). Bloom starts out as a small-time criminal who is desperately unemployed, but soon evolves into something far worse when he discovers a way of exploiting the darker side of the News Networks. His lust for News Man Glory (which may even surpass John Campbell’s of TV3 fame) is unwittingly aided by News Pro Nina Romina (Rene Russo, Hottie from the 80s/ 90s and beyond). Together they rewrite the rules for news gathering.

If you have seen the ‘70s hit film ‘Network’ starring Peter Finch, and got it…then you must see this brilliant work written and directed by Dan Gilroy. It’s gritty, suspenseful, shocking and frightfully believable. I don’t rave about movies often but trust me; you’ll want to see this one. It’s possibly Jake Gyllenhaal’s best work ever. You will need your IQ and EQ for this one. I give it 5 Stars!