Miller Yule – Shoot Me In The Heart e.p. Release 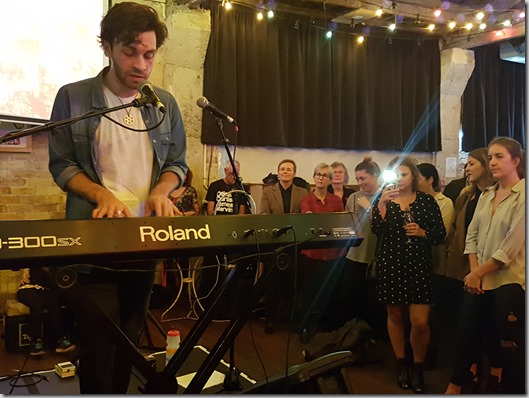 Miller Yule has a voice that is wonderfully warm as it is rich. He plays the guitar with a technical flair without compromising the beauty of melody. From the lull of latest single Shoot Me In The Heart to the reworking of Springsteen’s I’m On Fire he quipped to the packed Little Easy venue “I didn’t know I knew so many people”.

Yule’s recent coverage on TV3 with reporter Kim Vinnell and the endorsement of broadcaster Charlotte Ryan (Yule was her sound engineer before she discovered his songs) has generated a lot interest in this young Kiwi singer songwriter.

Miller’s exuberance has been likened to Jeff Buckley with the story telling of Bob Dylan, an original talent that had Vinnell asking the question “Is this NZ’s next Kiwi musician to watch out for?” One listen to his single Shoot Me In The Heart and you will hear the honest lyrics of a reflective talent, a commodity that is rare in musicians these days.

Yule’s song A Full Moon Melody is an example of the aforementioned musical nous, it’s one of Yule’s first songs he wrote adding when it first wrote it thought “I’ve struck gold straight away” saying his favourite song on the e.p. is Little Things because “It all came together so well in the studio, it just kind of works”.

Playing songs off his new e.p. See You ‘Round, Rescue Me and the annoyingly catchy Just Smile remarking “That brought the mood down, let’s pick it up again” as he launched into an interesting acoustic version of Beyoncé’s Single Ladies that had a small group of girls upfront responding to the young songwriter’s every whim.

“I do hear things, like “that song would sound cool if I slowed it right down”. He’s a big fan of experimenting putting songs “in a major instead of a minor”. It was a damp Auckland night but the party was upstairs, his e.p. is now available to buy, like a true musician he was even prepared for the unexpected as Ryan asked the crowd “Do we have time for an encore?” Yule responding spontaneously with Nancy Sinatra’s These Boots Are Made For Walking complete with slide guitar.

The last words of the night belong to the young musician. “Beyoncé always manages to get the crowd going even if she’s not here”. Can’t argue with that.