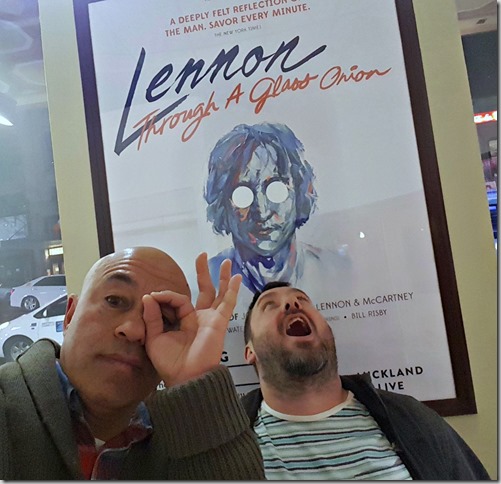 Love him or loathe him, singer/songwriter John Lennon has penned some of the most recognisable hit songs with the Beatles and as a solo artist before his untimely murder. Unlikely choice, Australian actor/singer John Waters’ breathes life into this biopic musical, his voice a fitting ode to Lennon in this unpretentious two hander show that is every bit clever as it is entertaining.

Waters (TV show Offspring) takes to the stage with accompanist Bill Risby (Leo Sayer, The Supremes) on piano to perform the show that is part spoken word, part concert. Waters has no trouble assuming the mantle of Lennon and has had over twenty years perfecting the Liverpudlian’s accent as he takes the audience on a trip down memory lane.

Bill Risby is fantastic on the piano, providing tight harmonies and the odd narrative, his contribution alongside Waters’ engaging monologue is invaluable as the pair play and sing their way through some of Lennon’s greatest songs including Woman, Jealous Guy, and Lucy in the Sky with Diamonds. I was blown away by how many great songs he had written, a testament to Lennon’s musical genius.

I enjoyed the show, its simplicity in portraying one of this generations greatest musical poets nicely unfolds onstage. Water’s uncanny ability to channel Lennon’s persona is well executed, I loved the way Waters filled in the blanks as if it were Lennon himself commentating.

Nothing is left to shy even racism taunts at Yoko, The FBI surveillance in America, the “communal wank” as a young man growing up on the mean streets of Liverpool and of course those fatal gunshots on December the 8th 1980.

The show is in two parts which some may find a little distracting, however the audience is treated with an entertaining 90 minutes of entertainment that will leave you pondering the question “What if he were still alive today?”.