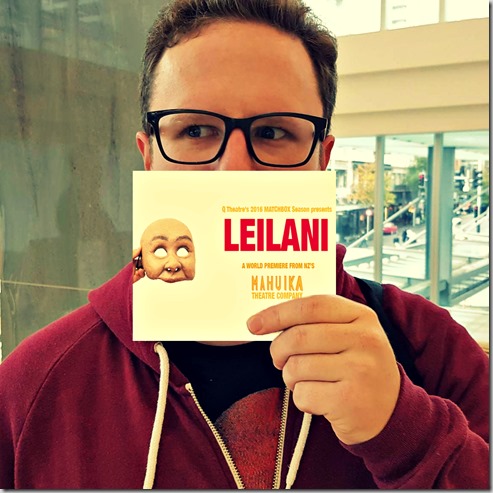 The atmosphere was electric as Pedro Ilgenfritz walked on to the stage to herald in the world premiere of emergent theatre company Mahiuka’s debut production – Leilani.

Inspired by Italian Commedia Dell’Arte, a type of theatre that emerged out of the 16th century and sees masks utilised, director Ilgenfritz and his cast (the immensely talented trio of Irasa Siave, Natasha Daniel and Aymee Karaitiana-Jones), created a comedic melodrama that explores Auckland’s homelessness issue and asks audiences to take a long hard look at society.

However, the action began before the lights even went down at the Q Theatre, as the half-masked Leilani (Irasa Siave) and her oafish boyfriend Junior (Aymee Karaitiana-Jones) arrive late to their own story – nestling among the crowd at the back of the theatre. It’s a bold, and wonderfully meta, introduction to play that oozes originality and a certain relaxed Kiwi charm.

As the prologue gives way to the story proper, Siave, Daniel and Karaitiana-Jones introduce us to a wonderfully eclectic – and distinctly Kiwi – cast of characters to tell their story. The production used specially crafted masks, beautifully made by Kate Lang, that were refined over two years of extensive workshopping, character development, and sculpting to bring the characters to life.

These characters were well-formed, distinct, and layered – the sorts of people who you might expect to meet on a night out on Auckland’s K Rd or Queen Street. While this is a testament to the skill of director Pedro Ilgenfritz and his cast, credit must also go to revered Kiwi Playwright Gary Henderson, who joined the team as the Script Developer.

There’s the shows main protagonist, Leilani (Siave) a bright-eyed and naïve (and pregnant) young woman who is an adult in age rather than maturity. Leilani, like each of the characters, is a deeply flawed individual, and a decidedly passive protagonist to boot – often finding herself subjected to the will of others – especially her ‘cuzzy-bro’ boyfriend, Junior (Karaitiana-Jones), a self-serving oaf that kicks her out on the street after shacking up with the narcissistic glamour girl Aroha (Daniel). From there we are introduced to a wide arrange of characters as Leilani attempts to navigate the winter chill of Auckland’s streets.

There’s the cuckolded and ever eager-to-please Tim (Daniel), a sympathetic but spineless character than attempts to help Leilani but is thwarted by his domineering girlfriend Sarah (Karatainia-Jones); Trev (Daniel), the kindly, though somewhat mad, homeless philosopher and his friend the self-serving opportunist, Pahia (Karatainia-Jones); and sleazy Lloyd (Karatainia-Jones) a pig of a man whose actions are met with varying degrees of disgust throughout the proceedings.

These characters are impressively diverse, beautifully rendered, and layered – there is so much going to behind the masks. While each performer energetically imbued their complex characters with humanity and relatability, I was particularly impressed with Daniel’s take on Tim (bumbling and hilarious) and Trev (one of the few characters to offer any degree of empathy).

At 70 minutes, Leilani is a hilarious and well-acted expose of the Kiwi characters who inhabit the streets of downtown Auckland. It manages to challenge the audience while leaving them in stitches. I highly recommend it to theatre veterans and virgins alike.

Leilani is presented as part of MATCHBOX, the Q Theatre creative development programme.