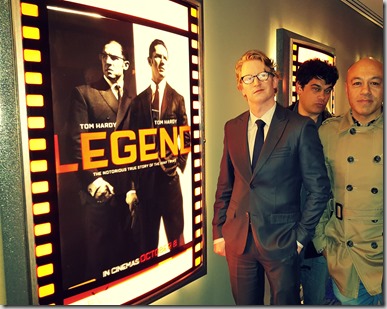 The Kray brothers are one of East London’s most famous folk law legends which have come about in comparatively recent times, hence the name. In fact the part of London where they controlled crime, is known locally as ‘Kray World’. Now I don’t know if the film makers intended to glorify that nostalgic that piece of local history in any way shape or form but when you cast Tom Hardy in any such role you can’t help adding a little glamour to the ‘legend. This certainly seemed to be the case with this film, however, that being said, Tom Hardy delivers an electric performance not as one Kray brother but both, and he does so convincingly

​The movie is both gritty and brutal, cheeky and humorous. It’s even a little romantic at times. And as well as all of that it seems to follow the historical events fairly accurately. Though one must appreciate a certain amount of ‘poetic license’ is at liberty to help the story along. Tom Hardy plays the perfect psychopath as one of the twins, Ronnie, which for me was the most enjoyable part of the movie. The role of the other twin brother, Reggie, was largely predictable as far as hard luck stories go on the big silver screen. Having said that, we do see some pretty solid portrayals of each of the twins

Legend is deliberately intense from the beginning to the end. It will have you squirming at times throughout various brutal scenes of violence which certainly justifies it’s censorship rating. But overall a well made film that will lock you into the plot. I’m glad the film allows for a little bit of deviation from the pure historical accounts, though I wonder if something not so profoundly dramatic might also have it’s place in theatre? I enjoyed the film and if you like a good mobster movie, I’m sure you will too. A bonus is Hardy’s solid,showcasing, performance