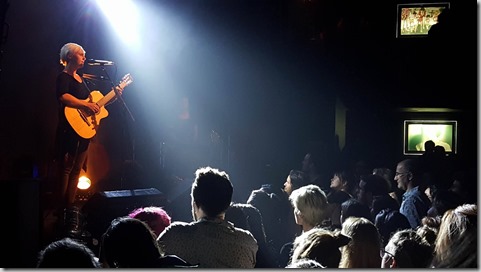 Whoever said ‘Playing Folk leads nowhere’ needs their head checked. Folk is probably not an accurate moniker when dissecting Marling’s curt but illustrious career, she has a lovely deep Blues resonance coupled with her Indie Folk leanings that is hard to ignore. And judging by the packed Auckland crowd which included John Campbell & blogger Simon Sweetman it wasn’t hard to see why

Unassuming, sporting short blonde bob, Marling weaves her melodies almost effortlessly with whimsical charm. Starting with the rhythmically Laurie Anderson-esque Take The Night Off, bassist Nick Pini & drummer Matt Ingram were close in hot pursuit, only for the audience to catch their breath as she uttered ‘This is our first proper show in Auckland’ to which someone piped up ‘We think you’re lovely’, ‘You obviously don’t know me’ she retorts

The familiar but not offensive words ‘It’s a short fucking movie man’ from Short Movie had the audience swaying, its acoustic notes almost out of place in the Powerstation, nevertheless Marling remained relentless as she ploughed through sometimes as if channeling her inner banshee, her songs dotted by her droll but engaging commentary

Whether referencing 16th century poet Khushhal Khan’s fascination with boys bums like peaches (Alas, I cannot swim) or singing folk legend Bert Jansch’s Courting Blues whom she recalled ‘Was one of those things forced upon me who I love’ Marling is a deep soul, her lyrics retching their word enriched goodness

Now and then the band drifted off leaving Marling to her solo vices, with Pini & Ingram at one stage during the set recounting their Auckland experiences. As the bassist issued a challenge to the audience to write down place names to visit in Auckland, Marling picking up on this remarked ‘You’re going to get a lot of people’s numbers’, as she imitated ‘Come see my bedroom’

Her soulful voice & soft guitar picking colliding wonderfully on Sofia and an interesting version of Dolly Parton’s Do I Ever Cross Your Mind nicely rounding off the set, assuring the Powerstation, ‘We’re coming dangerously close to the end’. Much to the chagrin of the crowd the trio launched into Rambling Man before Marling blessed the audience ‘You’re a fun crowd destined for good things’. Now if this wasn’t a papal blessing I don’t know what is, but then again you can never get too much of a good thing