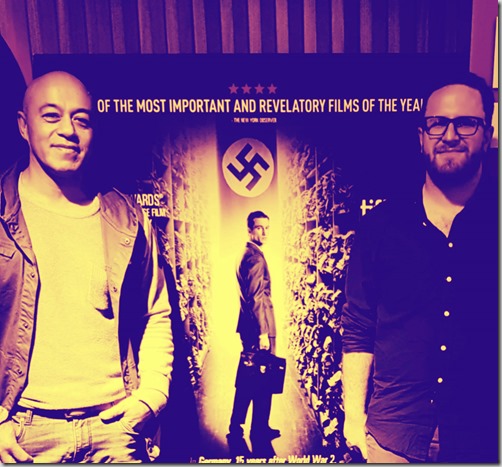 War torn Germany rebuilds itself in the late 50’s in director Giulio Ricciarelli’s explosive 2014 film Labyrinth of Lies. It’s a film based on the true life exploits of one man’s course (Johann Radmann) to prosecute Nazi officer’s responsible for carrying out the heinous war crimes in Auschwitz.

No mean feat, considering most of them were attributed high places of political power. Ricciarelli’s masterful eye captures the unfolding drama superbly, the acting wonderfully serving its purpose with great effect.

Inglourious Basterds & Homeland star Alexander Fehling is wooden as public prosecutor Johann Radmann but sticks to his character as if in its shadow. He takes on the historical case of Charles Schulz, a former Auschwitz extermination camp commander, who is now teaching at a school in Frankfurt, this in turn leads to his hunt for former SS officer and physician Josef Mengele.

As nobody is keen to take it up, Radmann is determined to bring Schulz to justice, but he finds his efforts frustrated because many former Nazis serve in the government. Of course it meant much more to the survivors who experienced the sheer terror of holocaust camps around Europe, but none more famous than Auschwitz in Poland.

In his frustration, he discovers deeply embedded lies in the German political arena dismissing the holocaust as “health camps” and personal revelations about his own family are also exposed leaving Radmann hurt and vulnerable.

Actress Friederike Becht is the one to look out for in this film, her role as the love interest seamstress is very convincing and a welcome respite from the film’s subject matter while German actor Gert Voss who passed away after the film was made, is stoic as pragmatic German judge Fritz Bauer with whom Radmann worked with while building his case.

The film is German, unless you have a propensity against subtitles, I can definitely recommend this historical drama. My only qualm, I felt my attention span waning slightly towards the end, mostly because of the convoluted story plot, otherwise it’s a riveting watch that demands your whole attention.

It’s a difficult subject to cram into a two hour movie, however Ricciarelli has done a solid job to turn a poignant event in history into a watchable commodity. Not that we needed reminding, however it’s always good never to forget where we’ve come from to plot the future forward.