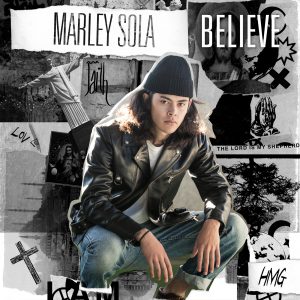 Christchurch native Marley Sola will release his debut self-titled EP on 30th September 2016. The EP features his two singles ‘On My Own’ and ‘Fill Me Up’, along with the new single ‘Believe’.

“’Believe’ represents a certain time in everyone’s life, where they learn to really step into their purpose of living”, says Marley. “‘Believe’ aims to encourage listeners to find their destiny, simply by showing that there is always someone out there who believes in them.”

Marley Sola broke onto the music scene as one quarter of the boy band sensation Moorhouse, who placed 4th on the first season of X Factor NZ in 2013. He gained a wealth of experience during his time with Moorhouse including national tours, festival performances and numerous television and radio appearances. Marley is now concentrating on his solo career and has been working with producer Vince Harder on the release of his debut EP.

“Marley’s talent is incredible, and this EP is just the beginning,” says Vince. “I’m very proud to be at the start of what will be an amazing career.”

Marley has a family history of musical success, with his uncle being a part of New Zealand groupSalmonella Dub. As a youngster, Marley would go backstage when they were on tour and it was there that his passion for music was ignited. Marley has always been a songwriter and attributes a lot of his song writing to a range of music he was exposed to while growing up, but his natural forte is R&B and soul. You can hear strong influences of this in his music along with touches of songwriters like Ed Sheeran and Matt Corby.