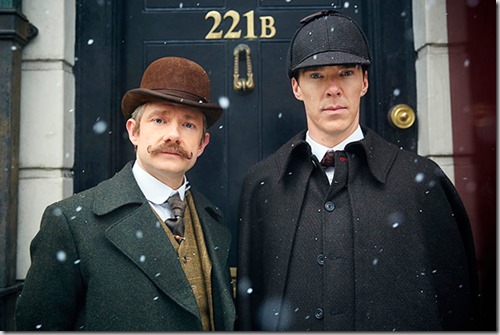 The new 90 minute episode, titled The Abominable Bride, has been billed as one of the most anticipated TV events of the year as the deer stalking hat detective with his sidekick Watson return with another action packed, drama galore episode that will excite the most fastidious amateur sleuth

But Sherlock, starring Benedict Cumberbatch and Martin Freeman, are caught between Victorian London and this modern age, which sounds confusing only makes the plot more the sweeter, although it was reported ‘the resurrection of dead characters left viewers wondering what was going on, who was real and where the story was going’

Add to the mix Sherlock’s cocaine induced hallucinations of Moriarty (is he real or is he dead?) it’s an episode that had left fans taking to Twitter to ‘voice their frustration about not knowing what was real and what wasn’t’ – the episode will be the precursor to the new season series

It has received mixed reviews by British newspapers and fans alike, but be certain this will be epic. Sherlock is on TV One tonight at 8.30 – though some lucky fans got to see it on the big screen at special cinema showings yesterday