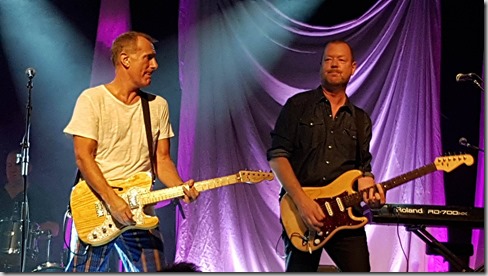 Aussie singer James Reynes’ ‘no bullshit’ approach to music always rang true with me. Maybe it was the 80s, where bad haircuts and the innocuous cheesy lines about ‘boy meets girl’ songs that had the packed crowd singing at Reyne’s beckoning. It was probably 30 years or so when I remember those lyrics to Reckless by Australian Crawl. Its haunting music mixed with Reyne’s reverberated vocals indelibly etched in my mind as a pimply teen

Sporting a resemblance to Sting in baggy attire, the Aussie singer was warmly greeted to the stage as the band ripped into his solo hit Some People & the popular Lakeside before introducing his band of players. Original Aussie Crawl drummer John Watson & Wanganui Maori boy ‘done good’ Josh Owen providing some tasty licks on guitar with guitar legend Brett Kingman, while Andy McIvor solid on bass hardly left his lunging stance pose

Sipping his cup of tea (same cup for the entire gig) Reyne welcomed the packed house to his Australian Crawl night, inviting the crowd to sing along wryly adding “A couple of songs are deeply shithouse but I didn’t write this song, that’s why we’re playing it early’ before launching into their 1982 hit Shut Down followed by a smattering of hits Reckless, White Limbo before pulling back the tempo, going it alone on keys for Hoochie Gucci Fiorucci Mama

For James Reyne fans, this was the ultimate gig. Playing tunes that kept fans of Australian Crawl in touch over the decades, Reyne was in his element. Sometimes grimacing or pulling faces as he interacted with his players, he was short and curt talking between songs, however it was quality over quantity as the band did a marvellous job keeping up with him, thanks in part to drummer john Watson’s powerhouse skin bashing that was featured prominently in front of house mix – so good 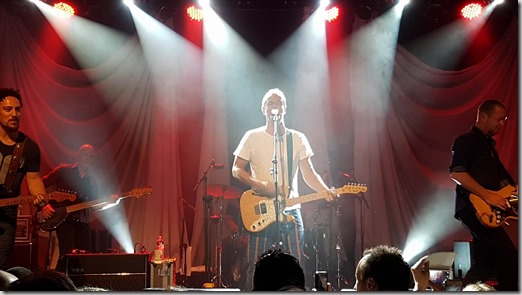 Beautiful People, Indisposed are songs that featured in my hormonal teen years and sounding every bit as good as when I first heard them. Personal highlights were The Boys Light Up & Reckless, including Reyne on acoustic guitar for a stirring sing along to Downhearted with musicians Owen & Kingman filling out on backing vocals for that big chorus crescendo – of course they had to compete with the crowd

Hard to believe, this man was fuelled on only a cup of tea. Hate to think what he could do back in those beer swigging beach days, but as they say ‘Good songs last a lifetime’ and Reyne has plenty in abundance – Great night of nostalgia, singing, harkening back to those high school party days made for an unforgettable night