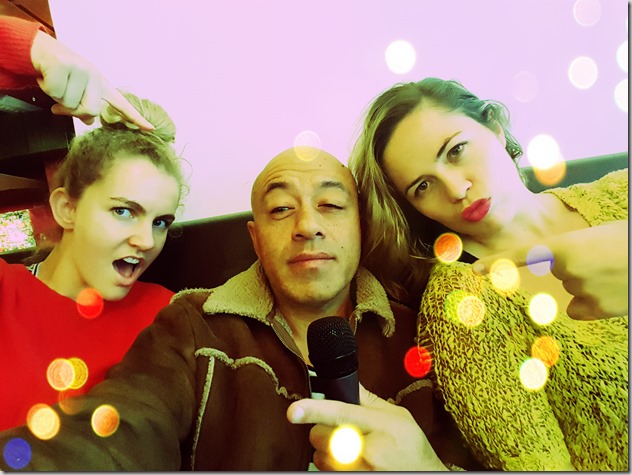 Donna-Rose and Karla are not your normal Latino Divas nor do they profess to be, in fact their original brand of Latin and Hip Hop inspired sound is closer to home than you may think.

Enter Frith Horan and Kate McGill, two friends who have forged a name for themselves under their outrageous sexier Spanish alter egos who, after much controversy are having a show to celebrate their new album Krystopia at the Basement theatre –‘The Best Possible Album Party That Anyone Has Ever Been To’ – It’s a title that even gets the girls befuddled .

“I can never remember it either” recalls Frith. “But I think we wanted to get people’s attention by having a really obnoxious title and hopefully that makes the show sound really, really epic. It gives us a lot to live up to I think”.

The show boasts some pretty wild disclaimers, for instance ‘A night out to end all night outs’ it’s a bold brash statement which doesn’t come cheap, and with no budget the girls have resorted to good old Latino know how, even so far as to putting up posters for the show on the windows of their cars, which sometimes can attract some unwarranted attention as McGill recounts.

“Ok, so I got posters up on either side of my car in my car windows – I have a Mitsubishi mirage 1993 I’m getting out of my car with all my crap, my glasses I’ve been to the gym I’m all sweaty and this woman says “Hi can I have one of those posters?” and I said, because it’s an unusual request “Ok what for? “Oh, I’d like to put it up at work it looks really fun” and I said “Great” and she said “What do you have to do with it?” Frith and I are large in the poster left, right and centre looking rather fabulous. “Oh I’m in it that’s me on the left” and she went “What? No, but you’re so haggard?” [Laughter] We had a stand down and I said “Ok, and I gave her a poster and she said “I’ll come to the show, I’ll come to the show” [laughter]
Like most great ideas theirs was one birthed out of chance, a serendipitous moment that was meant to be as if foretold in the stars pointing out the way to stardom and a great album party.

“We always wanted to do a show together for a long time” says Frith. “But basically Kate and I worked on a project for the last couple of years called Munted, it’s a show that we toured around New Zealand and overseas and while we were working on that and going through a very stressful rehearsal period, Kate and I of went out for a cup of tea and just started chatting to each other as these weird and wonderful character. So Donna-Rose and Karla were kind of born out of us mucking around a little bit and having fun”.

The show runs from May 26 until May 30th at the Basement Theatre and the girls are hoping the ‘party’ theme will attract not only party animals but also people who want to step outside the box to experience that is new to Kiwi audiences.

“That was one of things we pitched when we were talking to the Basement initially, something we held very strong in our purpose, getting young non theatre goers to the theatre as well as well as creating something that’s inclusive for everyone”.

Bookings via iTicket
The Best Possible Album Party That Anybody Has Ever Been To plays 26-30 May, 7pm.

Tagged as : Frith Horan | Kate McGill | Krystopia | Basement theatre | The Best Possible Album Party That Anyone Has Been To | interview |