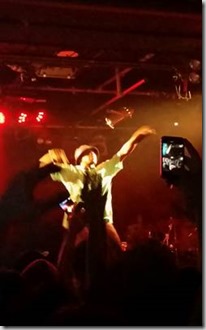 If you didn’t hear Funk Volume were in Auckland City for the first time on Friday Night rocking the stage at Auckland’s The Studio then you missed out. Funk Volume a record label founded by rapper Hopsin featuring DJ Hoppa and some of the hottest rappers in the game, Jarren Benton & Dizzy Wright. They all performed very well and had the whole crowd going crazy screaming out Funk Volume. Jarren Benton started off the night absolutely killin’ shit. He was followed up by my personal favourite Dizzy Wright starting off with my favourite song Can’t Trust Em. Dizzy while lighting up a blunt. The talk of the night was the man who sees through white contacts, he goes by the name of Hopsin. This dude came out with a blast and woke the people of Auckland up with tunes off his new album Pound Syndrome and earlier jams. He had it all from head-banging beats & his fast rapping flow, the crowd were into it and loving the Funk Volume. It was one hell of a time, here’s hoping they return soon. Thanks Funk Volume!!