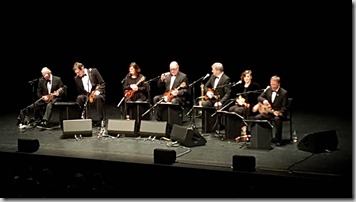 The Great Britain Ukulele Orchestra albeit with a hint from their namesake, sound like they play instrumental accompaniment with the treasured adapted Hawaiian taonga – the ukulele. To my surprise, this was nothing further from the truth, as the talented English septet entertained with banter, wit and song (shit they can sing well too) for a couple of hours that would make the local X-factor TV show cringe in comparison

Pony tailed soprano ukulele player Dave Suich was quick to forge a bond with the Kiwi crowd as he offered a prize pack to a woman in the front row which included a couple of ‘ukulele plectrums made from his hotel key’. ‘Good news for you, but not for me’ he quipped as the group ripped through a generous two sets of loved favourites including Prince’s Kiss, Pharrell Williams smash hit Happy and group member Leisa Rae with a powerful performance of fellow Brits The Zuton’s world-wide hit Valerie as popularised by the late Amy Winehouse

New Zealanders love affair with the ukulele is entrenched in our childhoods (well most of us anyway) as the Orchestra caressed the crowd, wooing them with a set formulated to engage and get the crowd foot tapping along. It’s been a while since I’ve seen a crowd play up to a band, although the call ‘Hawaiian’ did wear thin after the first couple of times, the crowd chimed in responding on cue

Founding member George Hinchliffe was instrumental directing the band, his stories had an old school charm, his humorous sense of timing spot on. Bass ukulele player Jonty Bankes ‘the baby of the group at 25 years’ according to Suich, held the groove down pat. His fat bass licks nicely balancing out the stringed ensemble while his version of Bowies Life On Mars was deserving of accolade. Funnier still was his uncanny resemblance to actor John Simm who plays the lead in the TV Show of the same name, while the finale number held the crowd literally spellbound

The group are currently touring the country ending up in Wellington at the end of the month. Forget your phobia of the words ‘orchestra’ or ‘ukulele’, if you get your grandchildren and grandparents to go along, chances are Dave Suich’s offer to buy a beer may still stand, but you didn’t hear that from me. The Great Britain Ukulele Orchestra finished with a standing ovation and deservedly so, make sure you get along to see one of this year’s most entertaining musical spectacles