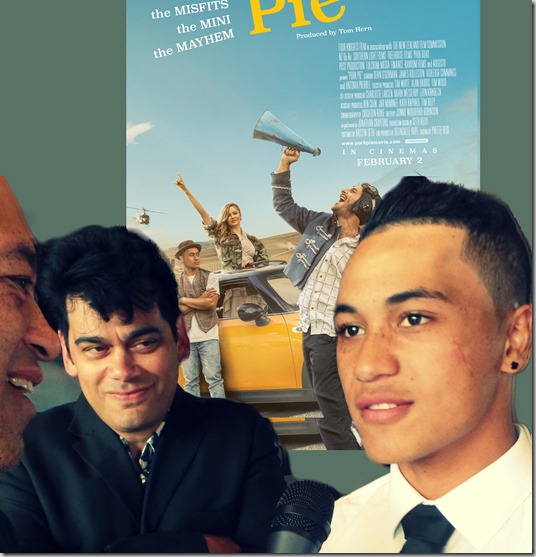 Kiwi’s will get their first peek at the accidental outlaws better known as the Blondini Gang today, with the launch of the official trailer for the film.

PORK PIE is an action-packed reimagining of the iconic 1981 kiwi classic, Goodbye Pork Pie and stars Dean O’Gorman (The Hobbit, Trumbo, The Almighty Johnsons)James Rolleston (Boy, The Dark Horse) and Ashleigh Cummings (Puberty Blues, Tomorrow when the War Began). The reboot is set to charge into cinemas around the country on Waitangi Weekend, February 2nd 2017, with the dating playing homage to original film (which was released on Waitangi Day in 1981).

Making remarkable progress from his recent injuries, James Rolleston, who plays Luke Anahera, is super-excited for kiwi audiences to see the finished product and is confident that it’s destined to create a whole new generation of PORK PIE fans.

“I had the most fun of my career making this film.” Says Rolleston. “It was great to be involved in a real kiwi comedy with Dean and Ash, and I reckon kiwis are going to love it! I can’t wait to share it with my friends and family and the wider public of Aotearoa.”

Dean O’Gorman, who plays Jon, a failing writer desperate to win back the love of his life, describes being involved in the project a career highlight.

“I spent almost six weeks in a MINI Cooper with James Rolleston driving the length of the country and it was hands down one of the best filming experiences I have ever had” says O’Gorman. “It was incredible to meet a whole bunch of New Zealanders right across the country and hear their affection for the original and excitement for what we were going to do with it.”

True to its original roots, the 2016 production of PORK PIE was a family affair. The film was written and directed by Matt Murphy, son of the director of the original film’s director, Geoff Murphy. Adding to the family connection, Matt’s brother, Miles Murphy, was the second unit director; his sister Robin was the Location Manager; and his daughter, Saoirse was a costume assistant. with Bruno Lawrence’s daughters Veronique and Melissa were script supervisors and his granddaughter Lily worked in the art department.

Director Matt Murphy is thrilled with the finished product.

“I’m really proud of what we’ve achieved,” says Murphy. “I think we’ve succeeded in harnessing the spirit of Dad’s film while delivering some great entertainment for a new generation. We’ve made our own road to Invers with this film, but theres no mistaking it’s from the same family as the original”.