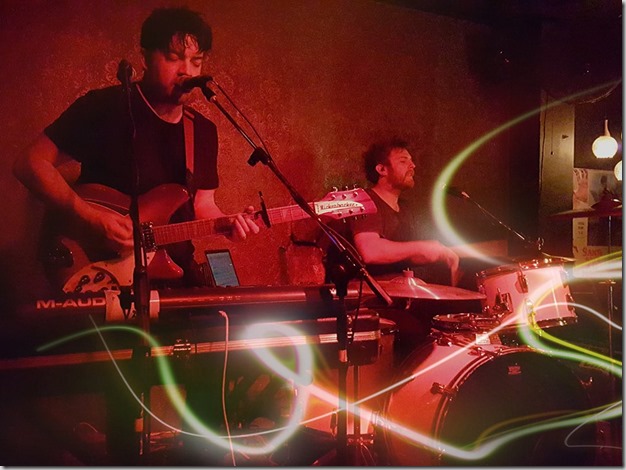 Eden Mulholland is the thinking man’s musician, bloody proficient on the guitar, sings a catchy tune and does a passable Christopher Walken impersonation. Together with long time mate Melbournian Ricky Birmingham the ex Motocade singer took to wasting no time as he launched into Shanty Town a great crowd warmer at Auckland’s Lucha Lounge before Ricky’s rhythmic chops ushered in Blueprint its catchy melodic hook was enough to get the crowd amped before shedding layers of clothing while Mulholland uttered “shit there’s a lot of words in there”

Eden Mulholland is probably one of the few people who have made good use of the space at Lucha, his high energy pop sense with a dash of punk sensibility is akin to Chris Martin singing in a Passion Pit covers band. He has a penchant for writing songs that have that first time listen appeal songs like the falsetto clipped brilliance of Body Fight Time or the radio savvy new single Utopia which is so damn catchy it defies belief

The boys looked comfortable in the smug venue, triggering textures and samples the songs held their own, while Ricky sporting dishevelled wake-up hair had the energy of a madman, his chaotic drumming style breathing life into the songs, while Mulholland signalled to the audience on Lighthouse “Here’s an old one” to which someone fired back “Get Ricky to sing it”

Lighthouse from his debut record popped up in set but not before one last dig at Walken (“What am I fuckin’ crazy?) as the boys gave it a good nudge to the end, with some genuinely funny moments as a tug-of-war with the banter of crowd to the boys. Eden Mulholland is a NZ Music Month discovery, his songs refreshing and insightful that resonate between soft to raucous. Get a hold of his music or check the boys out on tour, hopefully we won’t have to wait too long for his next album or gig