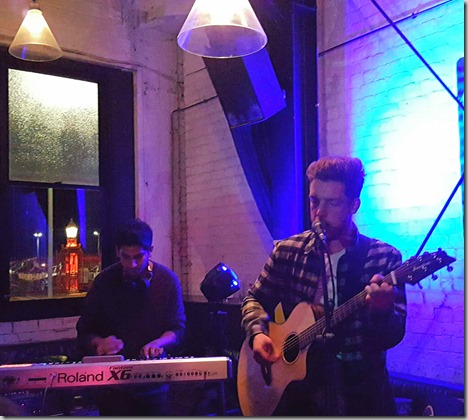 It was a good night to take shelter from the wintery elements and head to Tyler St Garage to check out the buzz of producer Cymbol 303 and Indie-Folkster This Pale Fire (Shivnesh Sumer & Corban Koschak). It’s an interesting marriage of EDM break beats from Sumer who is known for his outlandish remixes of Lorde’s Tennis Court or Avalanche City’s latest twee radio hit Inside Out, combined with Koschak’s Indie leanings it’s a formula that hits all the right notes, and we get to hear songs off their new EP The Cycle live

Warming up the crowd with a healthy dollop of Drake mixed with some Odesza plus current faves, Sumer was in his element, a bobblehead behind the decks you kind of get the feeling this is what he’s like when he’s at home, the freedom of playing whatever to his brethren. He managed a solid job of getting the crowd to their feet as the place started packing in, the familiar sight of an acoustic guitar took to the stage, it was time to hear some of the hit songs that have brought attention to these two melody makers

Burst of Colour with its annoyingly catchy intro is a superb tune that deserves all the attention it gets, its penned and tweaked to perfection to fit the pop formula, if you’ve heard this song on the radio you’ll know what I mean. It’s an interesting dynamic having an acoustic guitar and vocalist upfront stage in front of the keys but it works, visually and sonically. Better Than Me has this insane beat after the vocal intro that doesn’t quit, its simple melody lending itself to the lull of Koschak’s relaxed vocal style. If you’ve heard This Pale Fire‘s previous outings like the brilliant tune The Night you’ll love this EP. Don’t Rob Me is also a great conclusion of a song, its euro-esque sound a treat to listen to with Sumer’s beats breathing life into the dance hit that has hit written all over it

If these guys are the new saviours of NZ music then we are witnesses to a bold new world. Its crisp, it’s got gumption and makes good pop sense. I took the advice from the fortune cookie handed out to me at the gig, on one side it told me where to download The Cycle e.p. for free and the other side to listen to my ‘rice bubbles talk to me’ – all I heard was snap crackle and pop

The Cycle is available for free download from TheCycle.co.nz for a limited time, or pick it online from all usual outlets.