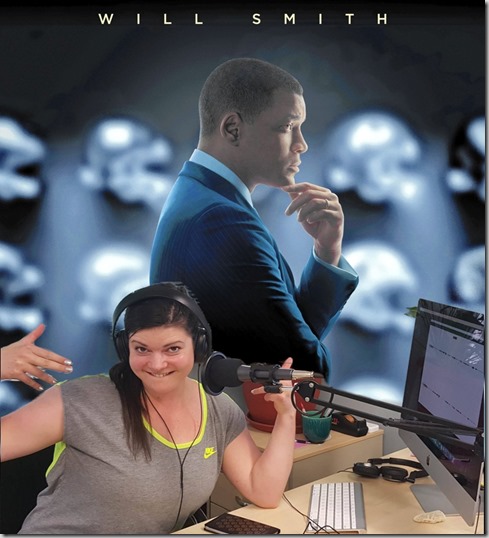 If you had a medical breakthrough you knew would benefit the world, would you be willing to be trapped by dogma or risk your own future to embrace the truth? I dare say that this movie had a huge impact on me. It revealed not only how tough the sports industry is, but also how powerful and unbreakable the human soul can be

Everyone knows the woodpecker, It’s a small bird that has tiny brain. But the way this bird functions to peck trees is so complex that we have no idea how limited the abilities of the human brain are. On average woodpeckers hit their heads up to 3,650,000 times a year. To compare, former Pittsburgh Steelers center Mike Webster (David Morse) had 70,000 hits for his 16 years of American football career. He died at the age of 50 from heart attack diagnosed with CTE (chronic traumatic encephalopathy).

Human brains are not designed to handle strong and frequent collisions and this movie focuses on American football players who were dying at a young age. Will Smith expresses some of his best acting (as he usually does) exceptionally well in this biopic drama. His observation as Nigerian forensic pathologist Dr. Bennet Omalu (Will Smith) goes beyond professional knowledge, partnering with forensic neuropathologist Dr. Julian Bailes (Alec Baldwin) he publishes a paper on his findings, which is initially dismissed by the NFL

In doing so, Omalu makes an ultimatum against the National Football league (NFL). He goes beyond and above asking to examine brains of dead football players, Smith’s script is persuasive his acting really draws the viewer into the story. As Smith (Omalu), uncovers and embraces the truth, he uses his own resources to discover shocking science results that affect major American football players and he is just about to change the future by studying death and fighting the most influential institutions in the world.

Based on true story, director Peter Landesman delivers a brilliant dramatic thriller that tells us how one smart and dedicated man can prove his science facing all possible political roadblocks. This movie is a cocktail of mixed emotions. You will feel sad, happy, surprised and relieved in this drama that searches for truth – it’s a must see film