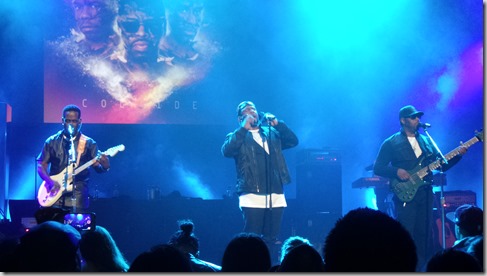 If you had told me before the show the best-selling R&B group of all time, Boyz II Men would be performing Nirvana or The Guess Who’s hard rock hit American Woman, I would’ve scoffed. Twenty four years ago it was 90s, the era that ushered in New Jack Swing, Carl Jones’s trendy quasi-political Cross Colours clothing label and of course R&B legends Boyz II Men. It was a night where sentimentality was present in bucket loads and age not even a factor, was rightly left at the door

Boyz II Men’s music transcends the decades, etched in the memories of young and old. The sold out crowd at Auckland’s ASB theatre made sure they were going to make the most of their time with their idols singing the hits that made the R&B group a household name in the 90s. After all, they are the best-selling R&B group of all time, with an astounding 64 million albums sold

As the trio, the baritone of Nathan (Nate) Morris alongside tenors Wanya Morris and Shawn Stockman, finally hit the stage, Stockman greeting the crowd with a cordial ‘Kiaora’ as the band charged up Motownphilly their 1991 hit complete with 90s dance moves while the crowd holding up their phones hoping to Instagram the moment.

It was a sea of lit screens as the animated trio paced the stage with vigour usually reserved for artists half their age as they launched into an emotionally fraught On Bended Knee, the 1994 ballad hit sending the clamorous crowd cheering as Stockman confessed the Australia & NZ Tour being ‘a wonderful, wonderful ride’. As he wished the audience ‘enjoy the show’ a deep hush ensued followed by their timeless classic It’s So Hard to Say Goodbye to Yesterday, the song still as hauntingly fresh as if only just released – spine tingling

It’s hard to pinpoint any given part of the show that defined the night, backed by one of the hottest bands in the business, this alone was worth the price of admission. Familiar hits Uhh ahh & Four Seasons kept coming keeping punters smiling as Stockman and Nate Morris traded their mics momentarily to pick up the guitars to treat the crowd to a party mix of classic hit songs. Some surprise picks including Bob Marley’s Jamming, Ed Sheeran’s Thinking Out Loud before rarking it up with rock classics Smells like Teen Spirit and The Beatles’ Come Together with Stockman bestowing Morris with the interesting moniker ‘Black Kurt Cobain’

Boyz II Men are more than what people pigeon hole them to be. They prove they can mix it up musically any genre and for me it’s the sign of a consummate musician. Their set tweaked to perfection, almost as if personally tailored to the Auckland crowd ensured no one left wanting. The guys making sure they touched everyone, happy to oblige selfies, even singing on one lucky audience member’s mobile phone while on call. Stockman checking in with the audience regarding house security chimed in ‘They wouldn’t have a job to do if you didn’t enjoy yourselves’

Their smash hit I’ll Make Love to You was expected as the trio took to handing out long stemmed red roses as Morris playfully flashed his six pack much to the delight of the mostly female crowd. As the night drew nigh the crowd got one more fling with the boys on The End of the Road a song as Stockman put has been ‘Part of everyone’s lives for the last 24 years’. It was a fitting coup de grace to an entertaining night. How do you put a price on sentimentality? Answer: Go see Boyz II Men