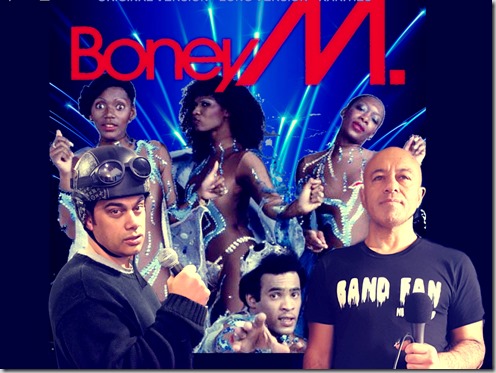 Speaking with Maizie Williams of Boney M is like hijacking a hot tub time machine for a day. Those lost memories of years gone, reignited as hit after hit song resurfacing as if old friends dormant until now. Williams a West Indies-born British model and singer became one of the original members of the successful 70s music group Boney M and is playing tonight in Auckland with her Boney M band

It’s also reported her and male counterpart Bobby Farrell (‘he wasn’t that tall’) who she fondly remembers as ‘an amazing person’ did not sing on the studio-recordings of their songs, they did perform the well-known songs live countless times, rigorously touring discos and clubs to earn a reputation for themselves, while Williams subsequently established an independent career as a singer

‘You’re still half asleep right?’ she teases down the phone. She playfully confides having visited Australia a couple of times but ‘To New Zealand, it’s the first time for me’. ‘Boney M is four people, we’re coming to hopefully deliver a great show and have a great time over there with everyone’

Boney M ruled the airwaves in the 70s the disco era. Rasputin, Sunny and Bahama Mama became iconic hits worldwide as the group created by German record producer Frank Farian smashed song charts around the world. Originally based in Germany, the four original members of the group’s line-up were Jamaican-born singers Liz Mitchell and Marcia Barrett, Maizie Williams from Montserrat and Bobby Farrell from Aruba, it was a time when was the groups popularity was fast gaining notoriety

“Oh my word, it would take forever to explain the 70s” recounts Williams. “It was a great time, it was the best ever for music. It was the era for music, and we had a ball. Not only with Boney M, but everyone at the time. Recording artists like Abba and Donna Summer you just name them, everybody was gelling together it was one big family really”

1978 was the group’s biggest year. They released a new double A-sided single, Rivers of Babylon/Brown Girl in the Ring, which became a massive hit all over Europe, reaching No. 1 in several countries as well as becoming one of the biggest selling singles of all time in the UK. It also became their most successful single in the United States, peaking at No. 30 on the U.S. pop singles chart, and as Williams recalls ‘That was our biggest’ but not even she could predict the magnitude of the song becoming one of the most iconic songs of that decade

“No, no – who would think that would ever turn out to be the case?” she says surprised. “It was just another song that we were recording, at the end of the day we knew it was a beautiful song, but at the same time no one knew what was going to happen but it took off like lightning, it’s still the most popular song amongst all the fans, even the new generation today”

“Like you say it’s a very spiritual song it comes from the bible in psalms verse 137. I think because we put a Disco melody behind it and made it sound a little bit more flamboyant everyone can relate to it. No matter what religion, no matter what culture, no matter who you are, everyone relates to that song. It’s a wonderful thing because at the end of the day it’s a blessing”

Throw a dart at their song list and chances are it will land on Brown Girl in the Ring (‘It flipped over and became another number big 1 hit, can you imagine that?’) and Daddy Cool (their first number 1 hit), however also not to be outdone were Swedish hit group Abba, whom Williams says “Oh yes we worked with them several times, wonderful guys. Back in the day it was Abba and Boney, Boney and Abba’ [laughter] It’s been one big adventure that I never expected or never dreamed of, every day I pinch myself, it’s more than I ever thought possible and it’s been wonderful, a privilege I feel so blessed”