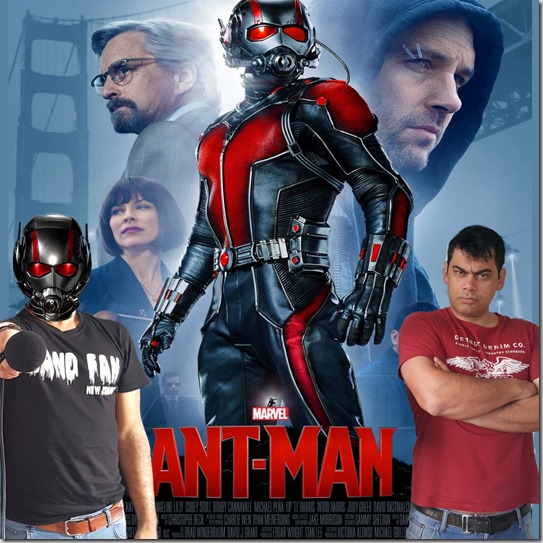 Ant-man is definitely the pick of all the recent Marvel servings of late. It was both comical and adventurous and able to deliver plenty of sure hero action without wiping out entire cities or destroying planets.

I loved Paul Rudd in the role of Ant man. Not the typically hero bound choice for the role as a super hero because of his strong association with comedy and light drama but for the same reasons so perfect for the role. Let’s be honest, I think we’re getting a little tired of the laboured humour in the previous Marvel instalments. Nice to have a real comic at the helm.

I loved the overall direction of the story by Peyton Reed, who did an outstanding job, and choice of special FX which were just right. Michael Douglas also deserves a mention for his performance as the mentoring scientist as does Michael Pena for his role as comic relief.

I seldom get to say this of Marvel films or of any films, but I enjoyed this movie from the beginning to the end.

Paul Rudd in a leading Marvel role? But wait it actually works. Rudd is funny without risking the early demise of the film (he’s kind of hit or miss with me) he’s an unlikely but likeable lead and is more than ably supported by a veteran cast including Michael Douglas & the almost unrecognisable Lost’s Evangeline Lily (she’s solid)

Fury’s Michael Peña comedic parts are standout in this high fuelled action movie that is as laughable as Auckland’s skyrocketing house prices (if not more), peppered with just the right balance of action & humour to prod you in the right places to keep you hooked in (anyone else spot Stan Lee?)

Ok so Rudd looks like he’s wearing the original Flash Gordon suit, but the Ant-cam effects and CGI will keep you on your toes and the climatic ending with the bad guy a treat. Yep Marvel have hit the mark ‘fair square’ with Ant-man and the ‘easter egg’ end bits with more Ant-man to come, just whets my appetite.

I implore you to see it on the IMAX in 3D, if bugs are your thing go see it, it will make you view Ants in a whole new light, oh, and Paul Rudd too – Unlike my esteemed ‘bro-hort’ Jarred I’m ‘swedish’ rounding my score. Enjoyed this film, but to be honest it was hard not to.