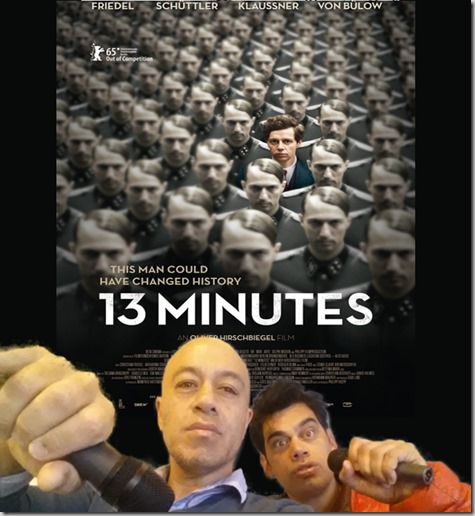 Not many movies can do war-torn Germany with realism like Oliver Hirschbiegel‘s emotion-charged 13 Minutes. Maybe it’s the German dialogue that gives the film credence, I mean hearing the Nazi soldiers speaking in their native tongue is a chilling enough reminder of the lead up to the Second World War.

Georg Elser’s little documented attempt to assassinate Adolf Hitler fails, and he is arrested (Hitler left 13 minutes before the bomb went off). During his confinement, he recalls the events leading up to his plot and his reasons for wanting to blow up Hitler, well I mean who wouldn’t have a crack?

Christian Friedel as Georg Elser the failed assassin is well cast he gives a solid performance as the womanising pacifist Elser who saves romantic interest Elsa (Katharina Schüttler) from her violent husband. Friedel reminded me of a young Teutonic version of actor Steve Buscemi, his role pivotal to the movie while Hirschbiegel’s keen eye reverts to and fro giving the viewer context as we see flashbacks of Esler’s life leading up to his arrest.

I really liked this film, it’s a gritty drama that unlike most biopic films translates nicely into a watchable entertaining drama, and I don’t even like subtitles. The film does well with its authentic war touches especially the dress of the day while the acting gripping. It won’t leave you dancing on the ceiling after it’s finished but it’s a disturbingly good watch that’s riveting right to the bitter end.

I enjoyed watching this masterfully made historical drama about a courageous and for what seems like a very long time in history, largely misunderstood, freedom fighter, Georg Elser.

The film is both gripping and intense from the beginning to the very end. It’s based around real events leading up to the Second World War and also during WWII but is told almost exclusively from the point of view of the ‘German resistance’ to the Nazi Party madness.

​As a person growing up in a western society with a very much ‘Allies’ perspective of WWII I have to say that this is, for me, the first German made film which I felt gave insight to what the madness of Hitler and all of the pain he must have inflicted, must have been like for those from within the borders of Nazi Germany. How horrible and fearful life must have been. I think I could truly say that I was moved deeply by this story and its attempt to reveal that not all were lured into the blood thirsty cruelness of the Third Reich

Director, Oliver Hirschbiegel, who also made Downfall (a story of Hitler’s lasts days before his suicide) has taken all political holds off for this movie. Whereas Downfall dealt with the Third Reich struggling from a very human perspective, this film reveals the true demented nature of Nazi Germany. For a German production company to have made this film really shows me that there has been a certain amount of acceptance of responsibility assumed.

The acting and craftsmanship put into the film is outstanding. I must confess that I am constantly impressed by the quality of acting that comes out of Germany. For me, I think its director Oliver Hirschbiegel that has left the biggest impression

A fantastically told story. Some what of a Romantic Tragedy but more importantly a historical account of one man’s bravery that I am sure may continue to help mend the relationships between the two histories.